Rarely, very rarely The Age is reminding its readers that the Australian Crown is a separate entity from the Crown of the United Kingdom.

Today was such a rare event. Hidden in the "On this day" section on page 18 The Age remembered 2nd March 1986: "Queen signs the Australia Bill, formally severing the last constitutional ties with Britain."

If only the fiercely republican journalists of The Age would sometimes look into their own paper to correct their wrong attitude and stop calling Queen Elizabeth II "the English Queen", when she acts as Queen of Australia.

But old habits never die. Especially when they serve their purpose. 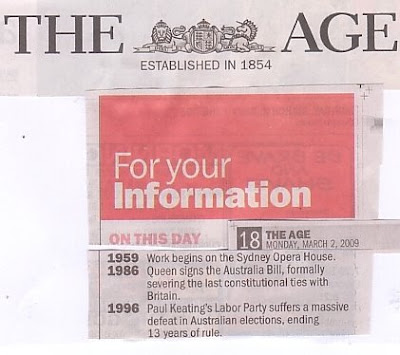 Posted by radical royalist at 2:55 am

Email ThisBlogThis!Share to TwitterShare to FacebookShare to Pinterest
Labels: Queen Elizabeth, Queen of Australia, The Age

The Princess Royal reinforced our Queen at the recent memoriam for the Victorian Bushfire Victims.Apart from the Queen's donation, Princess Anne, the hardest working Royal, showed her thoughtfulness for the Australian People & joined in their efforts to support the "mateship" as demonstrated by the rest of the population.
It beats me how the Labour Party can appoint failed politicians to manage this huge funding effort.
What do you think?

Well, the media generally are property of some finantial interests. The question must be: who owns The Age?