A Royal Visitor in Melbourne

Friday, 16th January 2009
His Royal Highness The Duke of Gloucester arrived to stay at Government House.

Friday, 16th January 2009
The Duke of Gloucester this afternoon attended a Lecture at the Royal Society of Victoria, 9 Victoria Street, Melbourne, Australia, followed by a Reception to commemorate the Centenary of Ernest Shackleton’s Expedition’s location of the South Magnetic Pole.

The Governor, Professor David de Kretser, AC, later hosted a dinner at Government House in honour of His Royal Highness The Duke of Gloucester.

The 12 hour return flight (departing Sydney at 6.00am and Melbourne at 8.40am; returning Melbourne then Sydney), included an inflight scientific programme, with papers being presented by international polar scientists and historians. Historic memorabilia associated with the quest for the Pole since Captain James Ross first estimated its 1841 position in Victoria Land, will be on display. A special historic brochure, commemorative stamps and a specially minted commemorative coin will be available.

The Royal Society of Victoria was pleased to note the presence on the flight of His Royal Highness the Duke of Gloucester, and many other dignitaries, prominent polar scientist (who were offer an in-flight education programme) and a large number of senior school children enthused in the pursuit of Science.

The Age reported on the events on 14th January 2009: Year 12 student Jessica will be in good company on Saturday, though she admits to being a bit nervous about the day's historic event. As the 17-year-old boards a chartered Qantas flight to Antarctica in the early hours of the morning, she will count the Duke of Gloucester and Victorian Governor David de Kretser among her fellow passengers.

Monday, 19th January 2009
The Duke of Gloucester will attend a meeting on 'Disaster Management Response and Co-ordination' at the Royal Society of Victoria, 9 Victoria Street, Melbourne.

Wednesday, 21st January 2009
The Duke of Gloucester will attend a Breakfast Meeting with The Royal Society of Victoria's Young Science Ambassadors at the Melbourne Aquarium, Melbourne.

All appointments in the Royal Diary

In 1945, Prince Henry, who had been Chief Liaison Officer to the British Field Force in France, became Australia's first royal Governor General. The family moved to Australia and Princess Alice concerned herself with the Australian women's services.

On his first visit to Australia in 1934, Prince Henry said at Bombala:”I would much rather be regarded as one of the family come to visit his cousins across the world, than merely as a visiting stranger without lot or part with the country.” In 1945, a few months over ten years since his successful Australian tour, the Duke arrived in Sydney by air to become the first royal Governor-General. Memories of his successful tour were still retained in the minds of many – so it was with genuine affection that the Duke and his family were welcomed back among us, and this time for two years.

While they were here, they worked hard at their position and demonstrated their capacity and willingness to understand the essential character, life and interests of Australians.

Their life in Australia had been full. They had learned a lot from us an we from them. The Duke’s generous nature was epitomised by one of his parting gestures, which was to present the nation with his own aeroplane, the Endeavour. (“The Royal Presence in Australia, 1867 – 1986" by Philip W. Pike, Adelaide Royalty Publishing 1986, page 60) 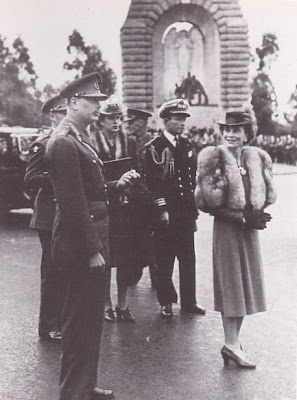 The Daily Telegraph wrote last year: [The Australian Prime Minister John] Curtin arranged for Prince Henry, the Duke of Gloucester, to take over from Gowrie. The appointment was a surprising one for a Labor PM to make, but Curtin chose Gloucester, brother of King George VI, to try to gain some support from Britain in the Pacific in World War II. … Although Gloucester's appointment was politically motivated, it was not as controversial as that of former Labor premier of NSW William McKell in 1947. 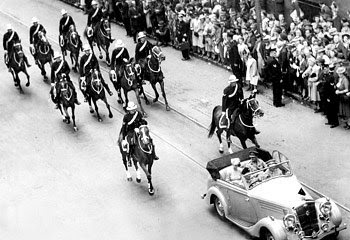 On 10th January 1947 the Sydneysiders bid the outgoing Governor-General, The Duke of Gloucester and the Duchess of Gloucester, a colouful farewell.
Posted by radical royalist at 3:04 am