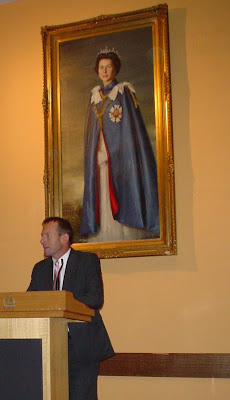 Rupert Murdoch lectured the Australians about “a” republic – again. In the Boyer Lecture he gave on 2nd November 2008 he made a confession that surprised nobody: “… if I were in a position to vote, it would be for a republic”. Well, Rupert, you are not in such a position! Go and vote for a US president. Or better: Go and sort out a proper electoral system in the country you call home! Or are you proud of the acknowledged "voting technology failures (that) are so widespread in the US" as reported here?

He is silly enough to advocate “a” republic, because “we should be independent”. We? Why we? Has he become an Australian citizen again? In the same breath he advocates Australia becoming a member of NATO. Murdoch: “Though NATO was designed to prevent a land war in Europe, it is now fighting well beyond its borders.” And he wants Australia being dragged into this mess? Is he not aware what NATO stands for? North Atlantic Treaty Organisation. Has he looked at the globe recently? Australia does not lie in the Atlantic, and particularly not in the Northern hemisphere. Who are the head guys in NATO?

It is hardly the Queen as the Australian sovereign who leads our soldiers into war.

Dear Harold, all this matters about economical interests and "republic", reminds me always the fraud referendum in Italy (1946), when the Mafia+USA insisted in changing the regime. Umberto won and everybody knows it. The result it's ... Italy, right now!

I have a very bad opinion about Murdoch and his taky press.