Requiem Mass is what Richard III would have wanted, says Cardinal Nichols. The Archbishop of Westminster made the comments in his homily during a Requiem Mass for King Richard at Holy Cross Priory in Leicester on Sunday, 22nd March 2015.

This evening we fulfil a profound and essential Christian duty: that of praying for the dead, for the repose of their eternal souls. Here we pray for King Richard III, ‘King of England and France and Lord of Ireland’ to use a title he ascribed to himself. This is a remarkable moment.

The prayer we offer for him this evening is the best prayer there is: the offering of the Holy Mass, the prayer of Jesus himself, made complete in the oblation of his body and blood on the altar of the cross, present here for us on this altar. This is the summit of all prayer, for it is made in and through the one person, the eternal Word, through whom all created beings have life. It is a prayer that arises from the very core of creation, the cry of the Word returning to the Father and carrying within it the totality of that creation, marred and broken in its history, yet still longing for the completion for which it has been created. It is, therefore, such an important Catholic tradition to seek the celebration of Mass for the repose of the souls of those who have died, especially for each of our loved ones whose passing we mourn. Let us not forget or neglect this great gift.

During this week, Mass is being offered in many Catholic Churches for the repose of the soul of King Richard III. Rightly so. That is exactly what he would have wished, having himself set up at least one chantry chapel for Masses to be celebrated for the dead of both sides of the Battle of Towton in 1461. This was a most violent conflict, marking the defeat of Henry IV, a single day on which between 10-20,000 Lancastrians were killed and a stark demonstration of the tragedy of civil war. Prayers were indeed needed.

Surely we can be confident that, despite the haste and the violent confusion of the time, this same Sacrifice of the Mass was celebrated by the Greyfriars for the repose of the soul of the defeated King at the time of his burial in their church here in Leicester in August 1485.

Indeed we know that Richard was a man of anxious devotion who kept and marked his own book of prayers and who must have attended Mass throughout his life. Remarkably we also know that this vestment that I wear this evening is recorded as belonging to the royal wardrobe of Richard III. We may reasonably speculate that Richard participated in the celebration of Mass at which this same vestment was being worn.

Richard was not a man of peace. The times in which he lived and the role into which he was born did not permit that. But now we pray for his eternal peace.

Richard was a man who sought to offer to his citizens justice through the rule of law. He brought in important changes to the administration of law, including the institution of the Court of Requests at which poor people could bring their grievances to law. He improved the conditions of bail, enabling people to defend their property in the period before trial and he ordered the translation into English of written laws and Statutes again to make them more widely available. His role and arbiter and judge appear strongly in contemporary records and he twice asserted, in one legal dispute, that ‘we intend, nor will none otherwise do at any time, but according to the King’s laws.’ His actions did not always match those words. But this evening we pray that the merciful judgement of our loving God is extended to him in every degree, for we know that it is only the gift of God’s mercy that protects us from the demands of God’s justice. 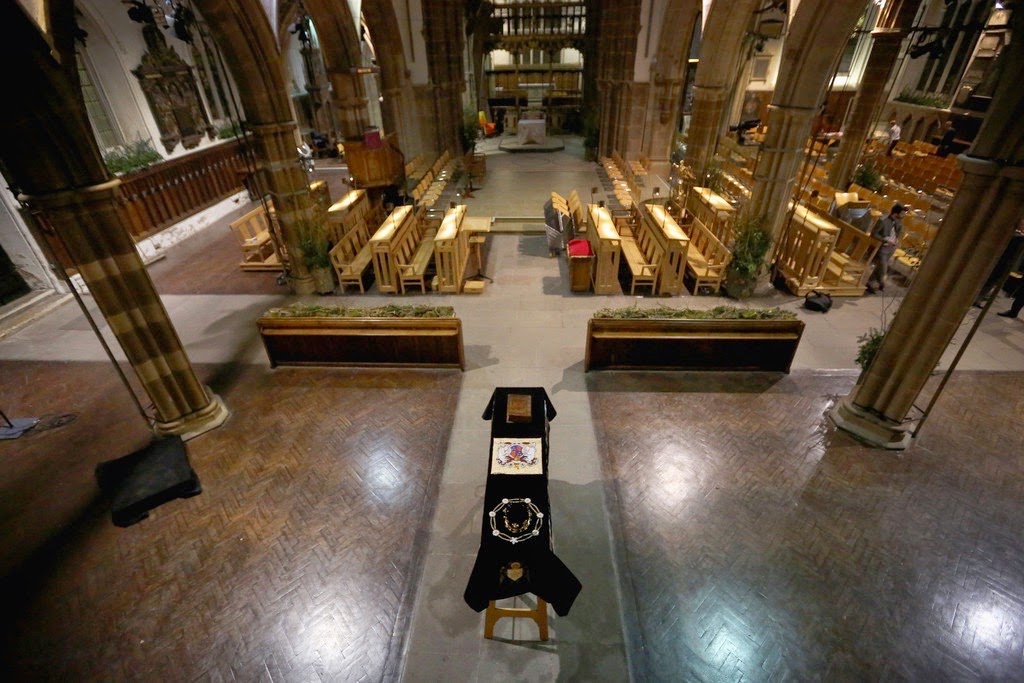 I am much relieved that this evening we are not required to come to any such judgement ourselves. Indeed the judgement of our fellow human being is only of passing consequence for we know how fickle that judgement can be. This we see most clearly as reflection continues on the dramatic years of the House of Tudor in both fiction and historical research: saints are recast as sinners and sinners can become saints. But that is not our business.

Ours is to beseech of our loving Father the embrace of his mercy for this our brother who lived and died so long ago but who through such strange circumstances is again at the centre of public attention and human judgment. We pray for him as a sinner, like every other person, even if his life was lived on a more spectacular scale and in a more public arena than most. Today then we seek not to assert the greatness of Kings but the greatness of God’s mercy towards them and towards us all.

Richard, we know was not the physically most handsome of men. We know he suffered a brutal death, suffering ten fierce blows to the head. We know that his body was subject to humiliation after death, paraded from the field of battle by being thrown naked over the back of a horse and there receiving further wounds from a hostile sword. But we also know that he had been baptised into the death of Christ and so received the promise that he would rise with Christ to new life.

The words of the Holy Gospel, then, invite our trust, not only for ourselves but for all who have departed this life with a trusting faith in God. We know that the Lord has gone to prepare a place, a home, for us. This promise of a heavenly home was made to Richard. In his day, a ruthless and violent age, especially in the upper reaches of society, a home certainly had to be a castle, strong, well-fortified and easily defended. Otherwise it provided no safety at all. But the home promised to us by the Lord is of a different nature. In it peace comes only through the victory of Jesus over the last of all enemies, death itself. Protection too is ensured by that victory which has dethroned the powers of evil once and for all, even though they are still to be found within the fashioning of every human endeavour. The entry to that heavenly home, its open gates and sweeping drive, the royal road of life, is none other than the person of Jesus, the Way, the Truth and the Life.

This evening we pray that this promise of the Lord is indeed fulfilled. We offer this holy Mass that even while his remains are lying in the Cathedral nearby, his soul is united with God in the glory of heaven there to await the final resurrection of all things in Christ.

This was the hope he held in his heart. This is the hope we hold for ourselves and our loved ones too. We share this one hope and the faith and love which accompany it. In this grace we pray for this dead King and we pray that the kingship in Christ, given to us all, may truly guide our lives and make us builders of that eternal Kingdom here in our world today.

Posted by radical royalist at 10:24 am