The Queen and the Duke of Edinburgh's 65th wedding anniversary


After the Diamond Jubilee, marking Her Majesty's 60 years of reign as Queen of Australia, The Queen and the Duke of Edinburgh can celebrate their 65th wedding anniversary today, but the royal couple have no plans for a major celebration.


The wedding on 20th November 1947 was one of the first joyful events after the horrors of WW II.

The Queen and the Duke will spend a quiet day together before carrying on with their duties for the rest of the week, including a joint visit to Bristol on Thursday and official engagements for the Duke tomorrow and on Friday.

It is a landmark which no other British monarch has achieved, and one which may never be surpassed.

During a luncheon to celebrate their golden wedding in 1997, the Queen paid a rare but heartfelt tribute to her husband, who holds the record of being the longest-serving consort in British history. She said: “He is someone who doesn’t take easily to compliments, but he has, quite simply, been my strength and stay all these years, and I and his whole family, in this and many other countries, owe him a debt greater than he would ever claim or we shall ever know.” 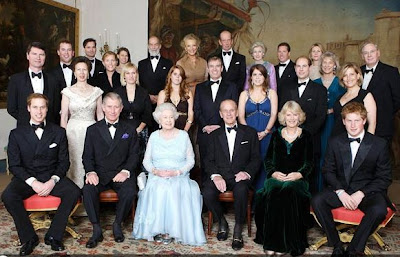 2007: The Royal Family gathered for the Diamond Wedding anniversary. 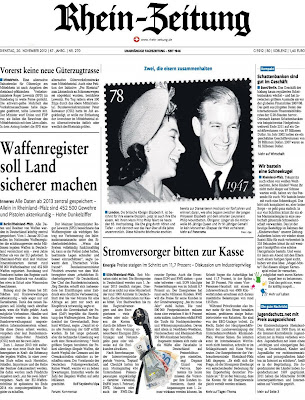 It does not come as a surprise that the Blue Sapphire  Wedding anniversary of the Queen of Australia and the Duke of Edinburgh was widely ignored by Melbourne's newspapers. While Murdoch's Herald Sun published not a single hint on the anniversary of our Monarch, The Age published one line on page 16: "Britain's future queen, Princess Elizabeth marries Philip Mountbatten at London's Westminster Abbey." A couple of German daily newspapers published the news on the front page, as an example here the cover of the Rhein-Zeitung (Koblenz/Mainz). See also the Frankfurter Allgemeine Zeitung: Eiserne Hochzeit im britischen Königshaus.