The Prince of Wales and The Duchess of Cornwall visited the Australian High Commission in London on 26h January to mark Australia Day and pay tribute to those who had lost their lives in the Queensland floods.

The event, attended by members of the Australian community, commemorated those killed in the natural disaster and recognised the efforts of the emergency services and the public who helped save lives, homes and businesses.

In a speech The Prince told the guests Australians had "shown such amazing ability to survive, endure and somehow make jokes about the horror that everybody's facing".

His Royal Highness also told the invited audience of leading Australians how in 1966 he spent around six months in their country and developed a "huge affection" for the nation.

The Prince spent two terms as an exchange student at Timbertop, a remote outpost of the Geelong Church of England Grammar School in Melbourne, Australia.

He then made them laugh when he said: "I've been through my fair share of being called a 'pommie bastard' - by God it was good for the character.

"If you want to develop character go to Australia." 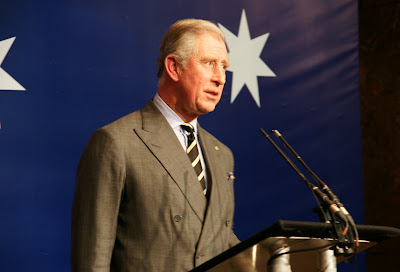 The Prince went on to say how livestock farmers were showing "unbelievable courage and resilience in the face of all these disasters".

He added: "The emergency services - we know how incredible they are when these disasters occur.

"We know also, just how much people in communities are helping each other. Suddenly adversity produces extraordinary generosity of spirit and people working together in a way perhaps hadn't quite happened before."

Australia's flood crisis began with record rains in November that left huge parts of the state of Queensland under water, killing 30 people.

The natural disaster also damaged or destroyed 30,000 homes and businesses and caused at least £1.9 billion in damage to crops and lost coal exports.

The state capital and the country's third-largest city, Brisbane, was swamped for days. The flood waters are now affecting parts of Victoria. 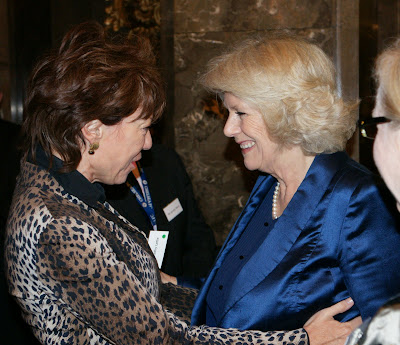 The Duchess is greeted by Australian writer Kathy Lette at a reception held at Australia House, the Australian High Commission in London.

Hosting the evening was Australia's High Commissioner John Dauth, and among the guests was Australian writer Kathy Lette who shared a joke with The Duchess and said afterwards: "I warned her that she was in a room full of convicts - the 'creme de la crim'."
Posted by radical royalist at 4:16 am

"They" will do everything to avoid King Charles III, so mafia will rule freely. We know the process and in Portugal our situation it's a good example.

Quite right, Nuno. You should have seen, how the Australian media reported on Prince Charles' speech on Australia Day. If he would had been Hitler, the comments could not been more negative. Even Monarchists are infected with this "Prince Charles hatred".