Where did the eggs end up? The Age missed the target

When it comes to the Australian Royal Family, The Age follows strictly a journalist’s credo: “Only bad news is good news.” 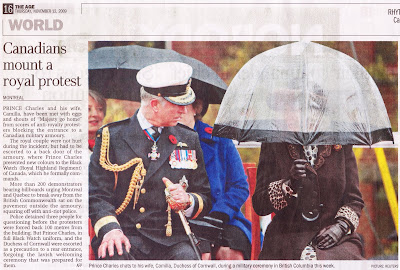 While the Melbourne newspaper had so far ignored the Canadian tour of Prince Charles and his wife Camilla, The Duchess of Cornwall, which started on 2nd November, one incident in Montréal made headlines in the republican mouthpiece. “Prince Charles and his wife, Camilla, have been met with eggs and shouts of 'Majesty go home' from scores of anti-royalty protesters blocking the entrance to a Canadian military armoury.” Two paragraphs on the “scores” turned out to be “200 demonstrators” (Montréal has 1.8 million inhabitants) “bearing billboards urging Montreal and Quebec to break away from the British Commonwealth”.

So it was not just an anti-Charles & Camilla protest, but a separatist incident. Not uncommon in Quebec, where two referenda were held, with a vocal minority ignoring two democratic decisions. Does sound familiar, doesn't it? Australians know this attitude, that a defeated minority keeps ignoring the result of a referendum.

A Canadian paper had a different report: The Edmonton Journal speaks of “150 slogan-chanting Quebec nationalists who tried to block the front doors to the Black Watch armory in downtown Montréal.” And contrary to The Age, the royal couple have not been met with eggs, but “[protesters] began to throw eggs at the front doors of the armory” before [!] the royal arrival. Nothing of the following was reported by The Age: “Prince Charles arrived wearing his Black Watch ceremonial uniform, and the reserve regiment's band greeted him by playing the regimental quick march, Highland Laddie.

"In his speech, Charles drew mild laughter with his remark about the 'little local disturbance' outdoors, then spoke warmly in English and French about his affection for the Canadian Black Watch. 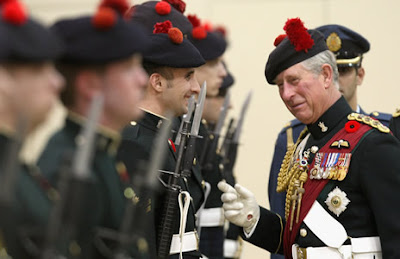 "The royals were also to meet recent veterans of Afghanistan before returning to Ottawa in the evening.”

The royal couple had landed in Montréal, where they were greeted by Quebec's Lt.-Gov. Pierre Duchesne before hopping into a black Towncar heading downtown in a 15 vehicle convoy.

"Welcome to Montreal" and "Welcome to Quebec" the crowd shouted as the Prince and Duchess were greeted by Quebec’s Premier Jean Charest on the downtown street.

Of course The Age ignored all the other items of Prince Charles’ visit to Quebec: At Montréal's nature museum, the Biodome, chosen as a site in keeping with the conservancy theme of the trip and Prince Charles's ecological campaign, about 60 royalty fans, most of them French, mingled with police, a quartet of protesters who sang and a young woman in a seal suit.

Mayor Gerald Tremblay greeted the prince at the entrance. Prince Charles stopped to chat with one fan who came with her husband and her two dogs. "He said 'Vous avez de beaux chiens’," said Bernadette Kosko.

Another 50 supporters waited for two hours inside. A few sang Happy Birthday, while most looked thrilled to have shaken hands with a prince.

Charles also met with Ouranos, a Montreal-based network of 250 experts on regional climatology whose mandate is to help society adapt to climate change.

When it comes to The Age’s policy, a couple of eggs thrown at an entrance door are more important than Prince Charles’ ambitious environmental fight. Poor Age and poor Melburnians who rely on such a newspaper. It came as no surprise that The Age chose the most unflattering photo. As usual.