On this day 29 years ago The Shahanshah of Iran, Mohammed Reza Pahlavi, died in Cairo.

To commemorate this great Monarch I recommend the Mad Monarchist's recent posting.

The Shahanshah and the Shahbanu visited Australia on 20th and 21 September 1974. Iranian Monarchists put the documentary of this visit up on YouTube.

Part 2 show Their Imperial Majesty's visit to Melbourne, where they were welcomed by the Lord Mayor, Ron Walker, AC CBE.

Of special interest is the then Prime Minister Gough Whitlam's speech, starting at 9'30'' with: "A great man. There have been many things Your Imperial Majesty has done which have inspired the Australian government ...". And he wasn't even talking about himself, good Gough.

Unfortunately most commentary is in Farsi, but just to see Melbourne in 1974 welcoming the Iranian Shah and His wife, makes this video worth watching. 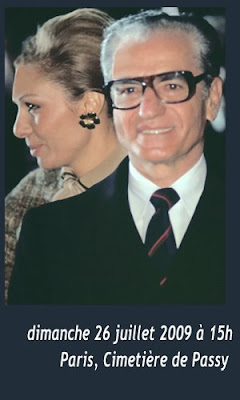 Call for a demonstration in Paris on 26th July 2009 to commemorate His Imperial Majesty.
Posted by radical royalist at 4:47 am